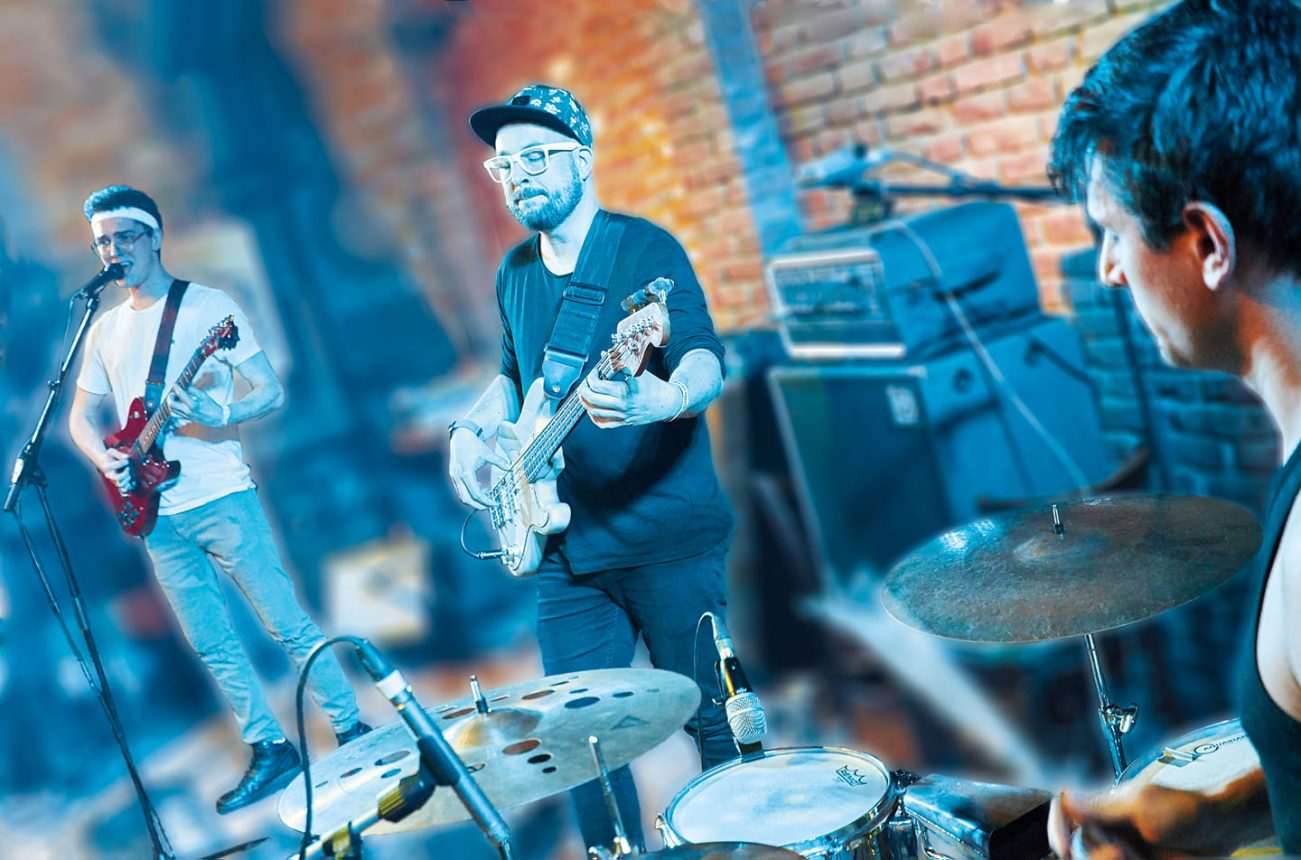 Darkness Positive – a trio that rocks any place they perform at. In the fresh and well-arranged repertoire that mainly sounds like jazz, it would be a crime to label them strictly as a jazz band. Funk, fusion, and even rap worked in by Šimon Švidraň, Adrian Simonides and Matej Richtarčík is what makes them Darkness Positive. This combination adds up to an unforgettable experience that we could also witness, when they played In Between Books. Recently, they released their debut album Prvý dojem (eng. First Impression), which concludes with a song Hoolitcha Trávy.

On your debut, you used the In Between Books recording that we are very glad about. Why, though?

When we were finalizing the mix and started to think about the final song list, something was still a little off. Originally, the album was supposed to end with a song that had nearly metal-like sound. I wanted it to end with something calmer, which would be a perfect ending. I browsed through every recording we made so far and found the audio of Hoolitcha Trávy from In Between Books, which fit perfectly for what I was looking for. I sent it to Šimon, so he could record the vocals and that was it.

What word defines your band the most?

Two words, for sure – Darkness Positive. The band name is what defines us the most as we are living oxymorons. Since the very beginning of our band, every success was always balanced with a failure, every positive moment with a negative one… Later, we realized that this title also perfectly describes what we try to do with our music – to fuse the infusible, which we like to experiment with a lot.

What led you to start the project Darkness Positive?

At the very beginning, we had a jazz project called Darkness Positive Quintet (guitar, bass, drums, tenor sax and trumpet). Meanwhile playing a as quintet, Šimon, Adrián and I would often meet up and jam on our own. After a short period of time, we composed the first songs for Basie Frank Band and Darkness Positive, as we know it today. We liked what we came up with and enjoyed it more than playing traditional jazz music, so we continued on as a trio.

Your inspiration, apparently, are daily life situations. How can you transform them in something so not typical in your lyrics? What is the main message you would like to get through to your audience?

All the lyrics are strictly Šimon’s thing and as his experiences are not that typical as they might seem, it reflects also in the musical composition. What we intend to achieve is that vocals function as rhythmically and melodically independent instrument in our compositions. What Šimon intends to really say with the lyrics is a question that you need to ask him personally, though.

How do you create your songs? Do you improvise and then pick the passages that you like or does somebody bring in a riff and you work on it together?

I’d say fifty-fifty. We turn the recording on, we play some, then we listen to it, and let it rest for about a year or so. Then we come back to it and see if there is something we could use. Or yes, someone brings in the riff and we work on it together. In this case, we also apply the one-year rest system.

What about the lyrics? Do they come first?

Most of the time, the music comes first, but sometimes we come up with the refrain phrases and then work the music around it.

You have been functioning in the same formation since 2012. How have you advanced since then?

We don’t really see any commercial success yet, except for the debut release. We try to mainly advance and get better in our compositions and lyrics.

Who has the last word in the band?

Nobody, really, so there are two possibilities that happen:

Do you have any ritual before the show?

Is there anything you do not accept in the band?

Not really… We don’t like bad sound at the venues and jazz purists in the audience, though.

What song are you the most satisfied with?

From bands’ standpoint, I’d say the album as a whole. If I were to say my opinion, I hate them all equally as I heard each of them like 200 times during the mixing. (laugh)

We are always happy, when people like our music. As we’ve been playing this kind of music stubbornly for nearly 4 years at the venues seen by only a few people that most of them are always surprised, we filter this out.

What has been your biggest success so far?

What plans do you have for the future?

We are planning on releasing 1 or 2 more videoclips for the singles from Prvý dojem, and then we start to listen to our demos from the archive and dig out material for the new album.

See All Posts | Next: RadioHead_Awards and us